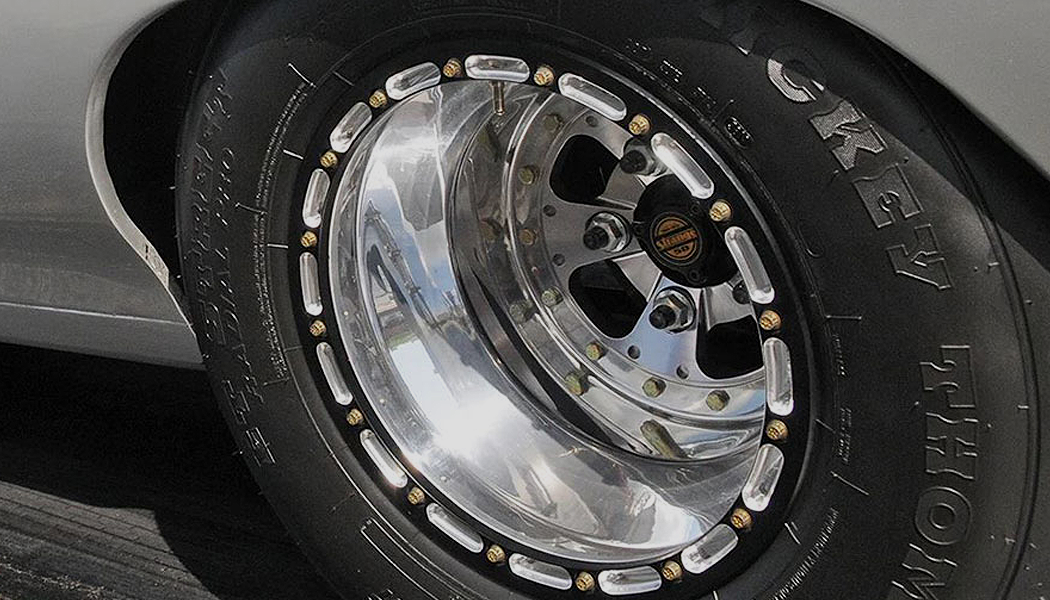 Radial tyre racing has become a staple of competitive drag racing across the country and around the world, and it shows no signs of slowing down. Over the last handful of years of this hardcore radial movement, Mickey Thompson has ensured that anyone who straps on a set of their tyres will have an edge over the competition. As the cars, the engines, and the overall performance potential of these cars have soared to once-unfathomable levels, the need for a quicker, safer, and more consistent radial tire design has become paramount.

Mickey Thompson has become the authority on how to construct this particular type of tyre, dedicating a vast amount of research and development across its entire lineup of radial designs. From the highly competitive NHRA Stock Eliminator and Super Stock classes to the outrageous tyre size limitations of Outlaw 8.5 racing. The boundaries of tyre size, and in some classes, DOT requirements, have been the limiting factors that the engineers have had to navigate to produce record-breaking and consistent tyres. But late last year, Mickey Thompson lifted up the veil on its newest radial masterpiece that has already begun to reinvent small tyre racing as we know it. 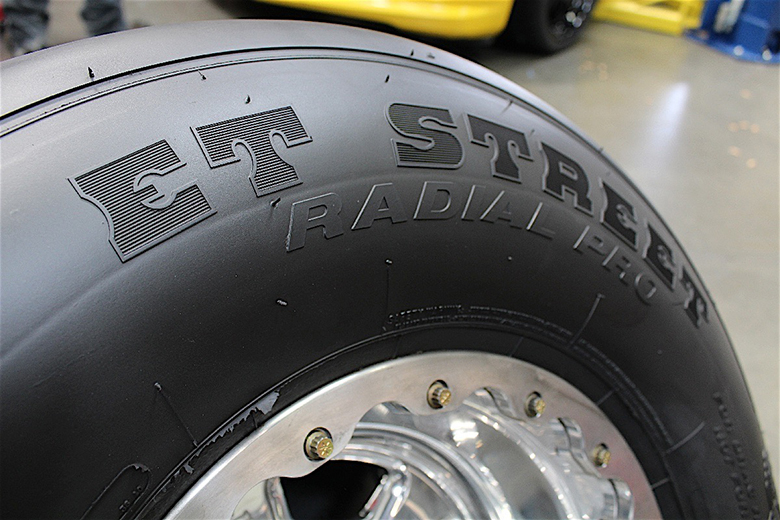 THE EVOLUTION OF A LEGEND

Almost ten years ago, the original 315 ET Street Radial came off the production line at Mickey Thompson and instantly redefined what it meant to be fast on a radial tyre. Featuring low rolling resistance in comparison to a bias-ply tyre, it meant that much less energy was required to gain wheel speed down track. Another important advancement that set this tyre apart from the rest was the introduction of the R2 rubber compound. But, as Mickey Thompson’s Tom Kundrik has shared in the past, the original 315 tyre was designed with far less horsepower and terminal speeds in mind than what the tyre was ever intended for, in essence stretching the tire well beyond its limitations.

Mickey Thompson provided a peek at what they could do when designed a radial tyre from the ground-up with pure drag racing in mind with the introduction of the 275 ET Street Radial Pro — a tyre that led to extensive and immediate battering of the record books in the X275 class and other 275 tyre-based classes. The success of this tyre established a new construction design which employed the use of a nylon ply instead of the steel belt, that would be carried over to all future Mickey Thompson Pro radials.

"After making only two passes with the 275 Pro, we knew the nylon ply radial design was a leap in the right direction," explained Tom Kundrik of Mickey Thompson.

During this time, noted small tyre tuner Billy Stocklin was heavily involved with a multitude of teams in the radial world, and after several conversations with Kundrik, was able to give some input on the tyres’ performance these racers were craving. His insight into the small tyre racing as a whole made perfect sense to be one of the representatives of the community. 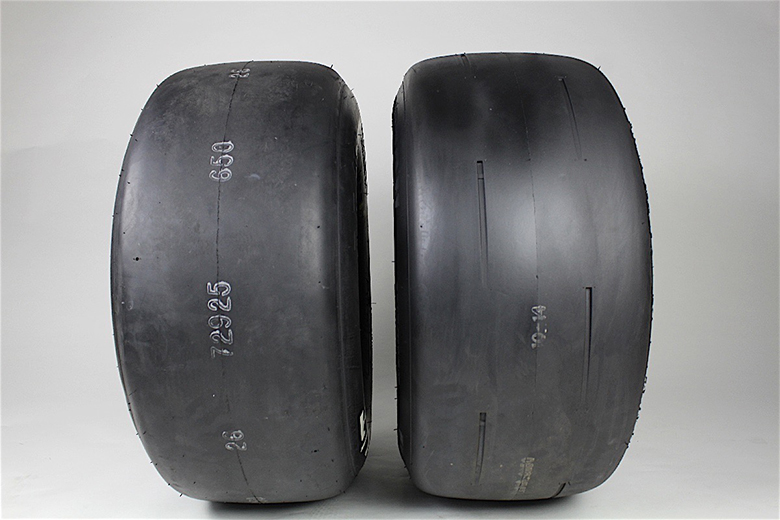 During his involvement tuning 275 tire cars, Stocklin witnessed first-hand how the release of M/T 275 Pro’s resulted in blistering fast records to this new nylon radial. This kind of game-changing setup was the direction the fans and racers were looking, and it wasn’t long after that the new Pro Drag Radial (PDR) arrived on scene. It may not have been the complete redesign that the community was expecting, but it was a step in the right direction, according to Stocklin. 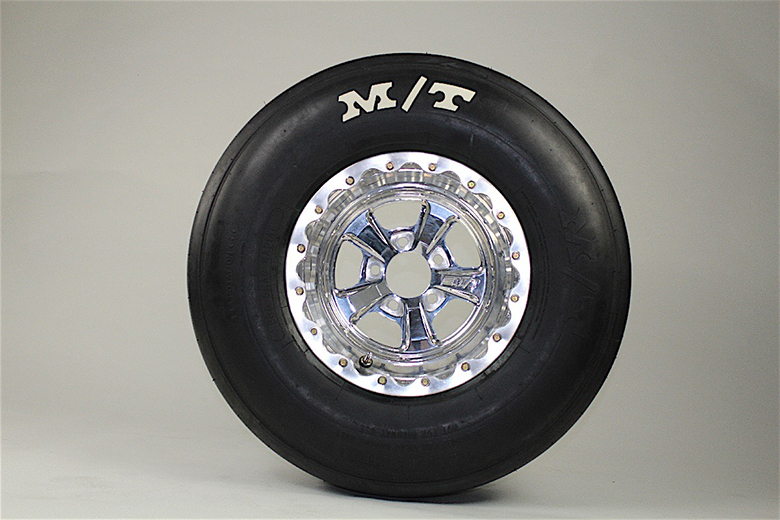 As expected, the radial racing community clamored to get their hands on the newest set of 3062R Pro Drag Radials — 10.5 by 29.5/15 slick-esque radials — as they awaited the rumored arrival of the 315 ET Street Radial Pro.

"While testing with the 3062R Pro Drag Radial, teams found that it is the most forgiving tire in the bunch, allowing the car to drive through a little bit of tyre shake without going up in smoke," radial racing standout and past world record holder Jason Michalak told us. 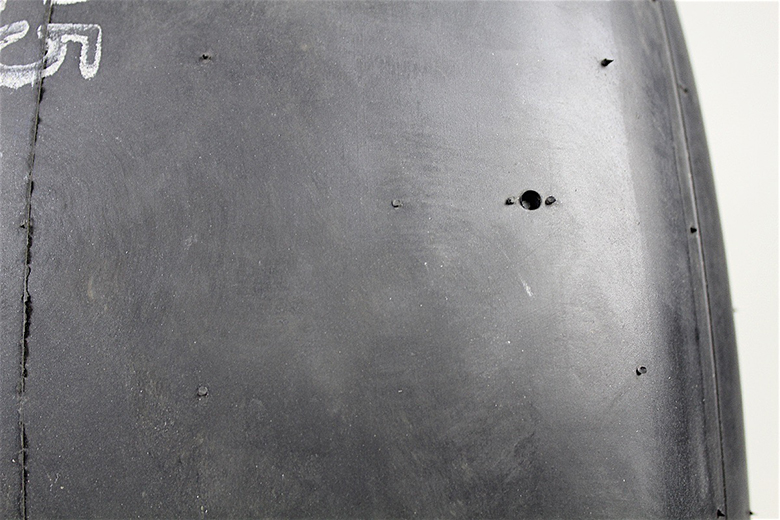 "When the 3062R was released, it was a game changer. It was substantially smaller and lighter than the original 315," Stocklin explained to us. "Not only would the car accelerate quicker from the 60 to the 330-foot mark, but it would get out the back of the track quicker, too. The downfall with what we were doing with the tyre was, despite the fact that you could accelerate faster with them, once you tried to bring a lot of power in, they reached their limit and had a greater tendency to blow the tyres off past the 330-foot mark."

Stocklin further elaborated that the original 315 wasn’t as susceptible to these kinds of mid-track issues. Historically, in radial racing, if a car made it out of the hole without going up in smoke, and didn’t do a large wheelstand, it wouldn’t encounter too many traction issues during a pass. 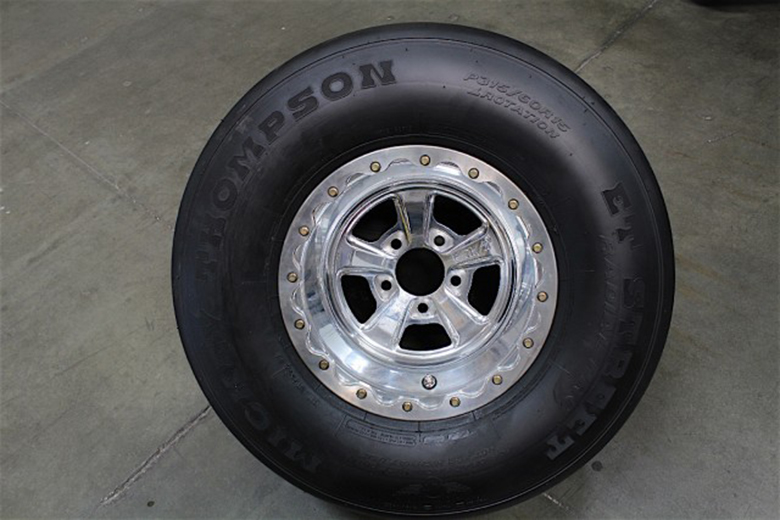 After months of waiting, the day was finally set for the testing this new super tyre, which gathered some of the biggest names in the sport to North Star Dragway in Denton, Texas, and was comprised of three different power adder combinations. The nitrous-huffing machine of Kyle Huettel, the nasty overhead blower-fed Corvette of Jason Michalak, and Rick Thornton’s demonic turbocharged Camaro were all in attendance.

"After giving a massive amount of feedback to Tommy [Kundrik], we got the tyre we wanted. This new Pro tyre retained the rubber compound of the original 315, gained the tread pattern of the 275 Pro, and was wrapped around the carcass of the Pro Drag Radial," Stocklin told us. "This made it heavier than a 3062R, but lighter than the original 315 radial. It also kept the starting line performance of the Pro Drag Radial, but was able to plant the power even better than the standard 315 through the center of the track." Stocklin explained that he put a very aggressive tune-up into Huettel’s car while on the Pro Drag Radial and wasn’t able to make a clean pass, having the same mid-track issues he explained earlier. 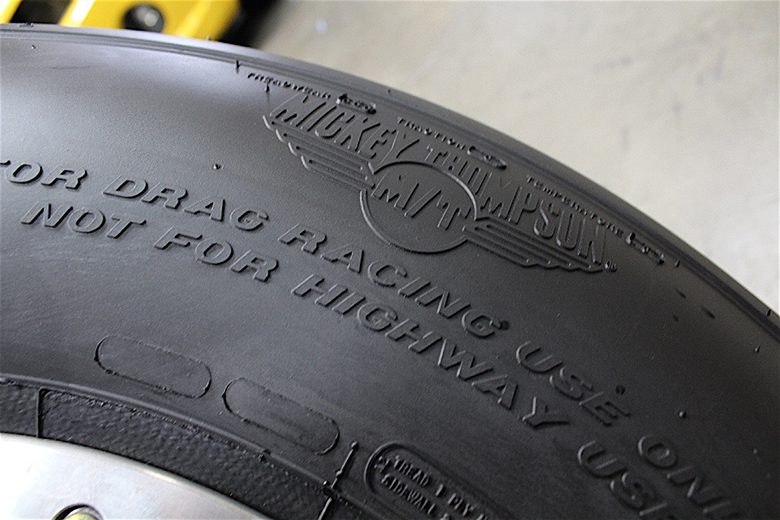 After two unsuccessful attempts, Huettel threw on a set of Mickey Thompson-supplied 315 Pro’s. During this time, the class record for Radial vs. The World was a 3.90-second pass in the 1/8-mile, Once he let his thumb off the button, Huettel rocketed his way to a 3.96. Taking into account what he saw, Kundrik walked over to Stocklin and told him to turn it up. This continued for two more passes as the elapsed times dropped to a 3.93 and then an even more astonishing 3.91-second pass.

"The biggest reason for the redesign was to satisfy the growing needs of the racers,"shared Kundrik. "We knew eaxctly what kind of performance we wanted from these new nylon tyres, and the construction needs to accomplish this; we just we’rent sure if the market was ready for it yet. The way we’re building tires now, you’ll be quicker and faster with a radial than you would ever be with a slick and even more consistent. A common misconception is that you have to be a rocket scientist to utilize a drag radial to its full potential, but that’s not the case. Another stigma in the radial racing world is that tracks need special prep for them, but these tyres bridge the gap and the tracks no longer have to be as good as they used to be to go as fast as you want to go." 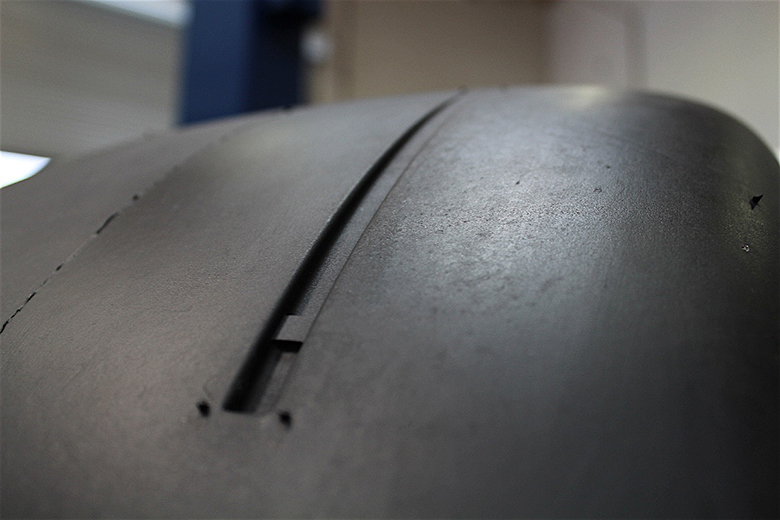 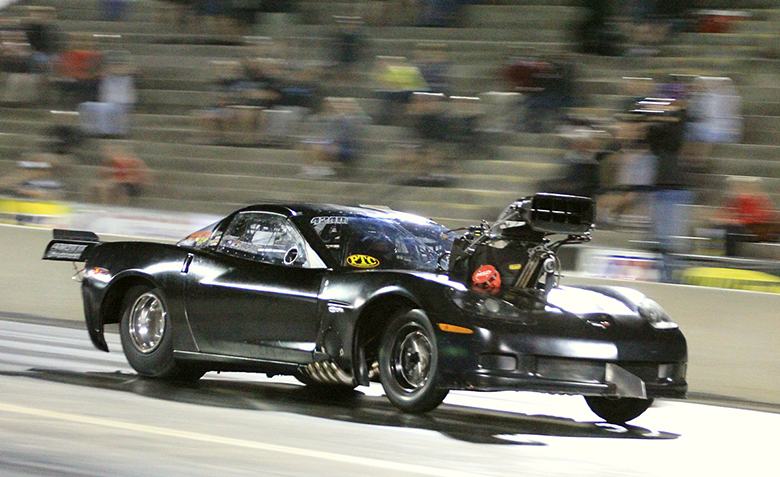 Not withstanding the fact that the ET Street Radial Pro is relatively new to the drag racing scene, it has made a big wave among the heavy hitters in the sport, resulting in record-crumbling passes since their introduction. We spoke with Radial vs. The World racer Jason Michalak, a past world record older in the class, and noted tuner Josh Ledford, about their experiences with both the Pro Drag Radial and the ET Street Radial Pro tyres. Both bring a very different perspective on the potency of these two tyres.

"The new 315 tyre is in a league of its own, and it is such an unbelievable tyre. Mickey Thompson set the bar high with the new design," said Michalak. " When you get onto tracks like North Star Dragway in Denton, where the prep is unbelievable, you can almost throw anything you want at it. During our time spent with the new 315, we’ve found it is slightly more forgiving than the previous design." 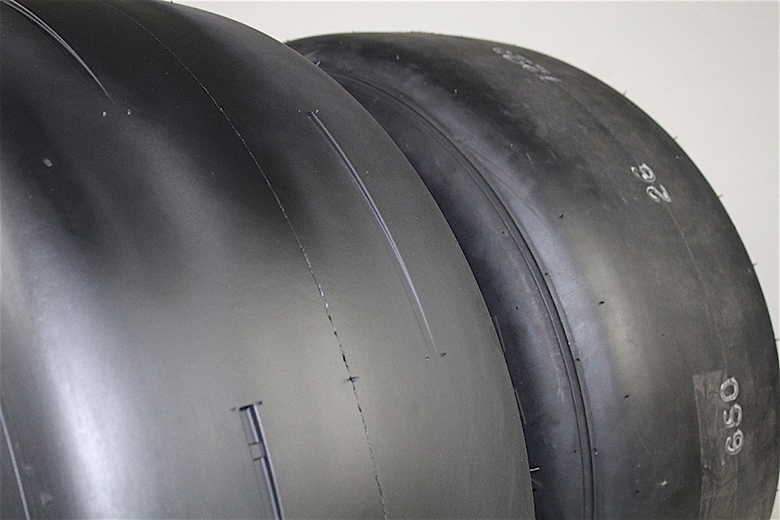 Michalak’s racing team, Bad9er Racing, can present the timeslips to back up these claims up, too. With the new tyre allowing him to break the 60-foot beams in 1-second flat, this easily eclipses Michalak’s personal best of 1.04-secondson the old 315 tyre.

Radial racing wouldn’t be where it is today without Mickey Thompson and its racing division. Everyone has picked up substantially on the new 315, and few think the tyre is even close to being maxed out.

"This new 315 tyre is insane. All of the racing programs that I have tuned for, we’re able to take advantage of this tyre and apply more power on the starting line than ever before," Ledford shared with us. "Mickey Thompson says the rubber composition is the same as the old tire, but it’s hard to believe." 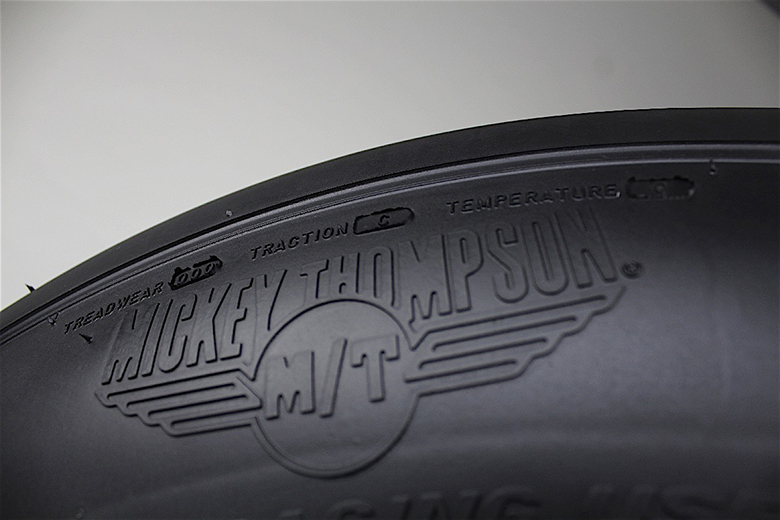 Ledford continues his praise by explaining that the ET Street contacts more of the race track compared to the Pro Drag Radial. The only downfall that he has run into is the weight of the tire opposed to the Pro Drag Radial; this is also reflected in the datalogger records in every car he tunes. He further explains that once you get past this small bump in the road, the sky’s the limit.

"If we talked about this two years ago, no one would’ve believed that we were capable of going this fast on a radial tyre … not in a million years," Ledford says. "The power to run the times that we’re seeing has been there for a while, but the 315 Pro really brings them to life. With the advancements made in tyre and converter technology, along with track preparation, it all adds to already potent engine combinations."

"The radial tyre is so impressive in comparison to the Pro Mod tyres that I’ve used. You’ve got a little tyre with a stiff sidewall … it’s essentially something you’d be able to drive around on a daily basis, and it will go .98-.97 in the 60-foot," Stocklin says. "Cars are going as quick as a nitrous oxide-equipped Pro Mod with this tyre through the middle of the track."

Another point that he made was the fact that, these smaller, and lighter tyres don’t lug down the motor when they reach higher speeds, allow the motor to rev up quicker and stay in the powerband. In comparison, a bigger tyre will always be slower for two reasons. The first is that it’s generally just a heavier tyre, and the other is that this larger tyre has to fight the glued surface of the track due to it’s increased rolling resistance. 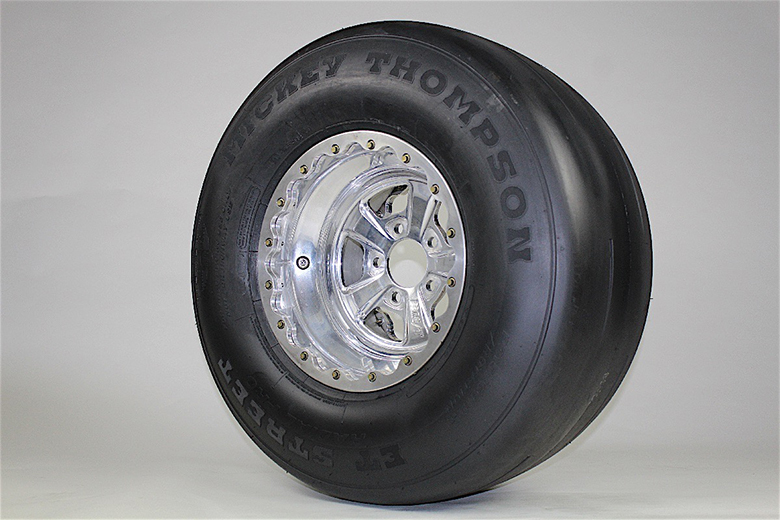 Stocklin concluded by saying, "this increased rolling resistance is very evident when you’re out doing a single car test session. In comparison to the larger tyres, it’s shocking how minimal the radials presence on the race track is, and this is another distinguishing factor of how impressive this new 315 is."

There’s no doubt that Mickey Thompson rolled out exactly what their racers wanted in the form of this tyre. With an astronomical amount of potential still to be untapped, this tyre will undoubtedly continue to set the masses jumping to their feet as the records are shattered. The racers of this world have continually found ways to satisfy the primal need to go faster and conquer the competition. This new improved Mickey Thompson tyre is sure to satisfy the needs of Outlaw racers for years to come, and continues right where its predecessor left off.

item(s) in your cart
Copyright © 2021 - Aeroflow Performance, All Rights Reserved.